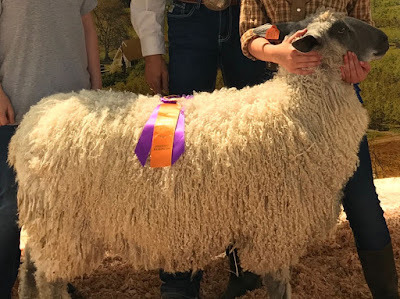 My first year showing Wensleydales at the fair! Daisy won champion in her class. (And no, she wasn't the only wensley ewe there!)

I'm hoping to improve my grooming preparations for this next year. 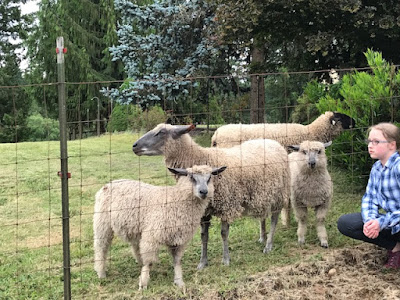 Here is Daisy w/ her two lambs summer 2017, Edelweiss and Queen Anne's Lace. I did not shear them, and am hoping to show them in full coats at the 2018 Clark County Fair.

Posted by The Coderlambian at 7:09 PM No comments:

We Have An Announcement 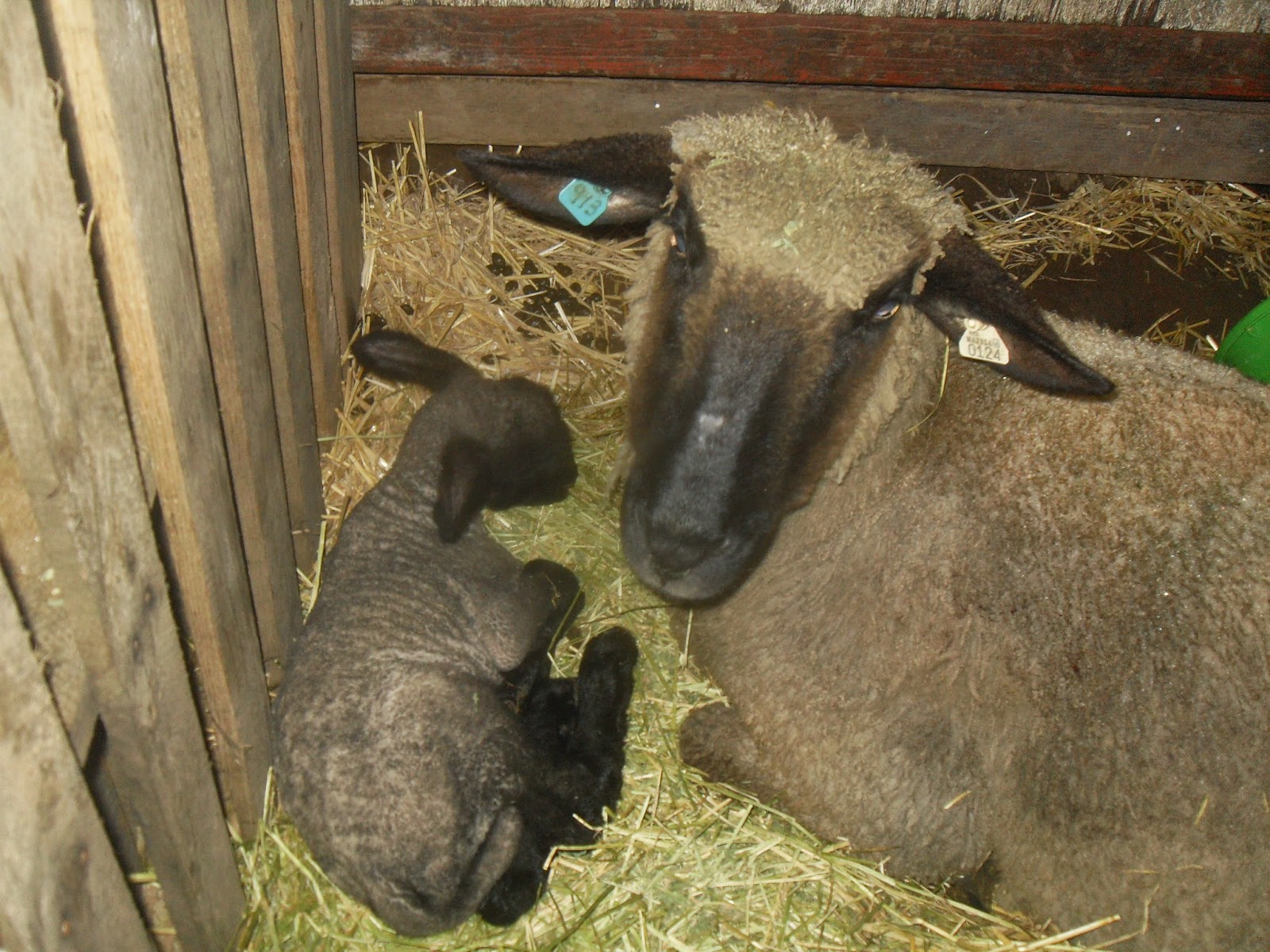 One of our breeder ewes birthed.
The sweet little guy is without a name at present - any suggestions?

Rachel: editor of the CODERLAMBIAN
Posted by Ray at 8:31 AM 2 comments:

EWE are cordially invited to attend a baseball game at Fort Vancouver's Parade Grounds.
Not only will you get to enjoy that sport which is relatively popular in the United States, but you will also find double pleasure in the costumes of which the baseball players, as well as some of the "cranks" (the proper English term for spectators), will be wearing.

Step back in time to the 1860s when the United States Army enjoys the fantastic pastime of baseball!

F.Y.I. you might know some of the "cranks." For example, here's Zachary in his spectator costume.

This historic game will be held at the Parade Grounds (opposite the Fort Vancouver site), on July 26, at 6pm. Hopefully, we will see you there!
Posted by GraceChristine at 9:58 AM 1 comment:

Saturday morning, the CODERLAMBIAN shepherds headed out with their sheep to the Clark County event center for weigh-in.
"Weigh-in" is the beginning of a process to make sure that our sheep are getting proper nourishment and gaining weight. We weigh our sheep here and then also when we arrive at the fair.
All of the lambs weighed more than they have in the past. So if you buy one of our lambs this year, you're bound to get a lot of meat. :)

Following are the weights:

Each of our sheep now need to gain about 24 pounds before the fair. That's about 0.4lbs per day!
Here is the minimum weight each of our lambs need to be by fair:

Now that we have sheep, we thought it necessary to send out another 'buyer letter.'
This was the result:


In case you can't read those articles, but you really want to, here they are:

Little Bo-peep
Written By Grace C. Coder
Little Bo-peep,
Is selling her sheep,
And hoping that you’ll be the buyer,
Please come to the fair,
She’ll look for you there,
Don’t buy your lamb from Fred Meyer!

Little Bo-peep,
Just got her sheep,
On Sunday, the 18th of May,
She needs to tether,
This young, new wether,
For it hasn’t been trained to stay.

Little Bo-peep,
Is taking her sheep,
To “weigh-in,” a 4-H affair,
Her sheep will be weighed,
Some marks’ll be made,
Then her sheep will gain weight for the fair.

Young MacGreggor had a farm   E I E I O
And on that farm he had a lamb  E I E I O
By Zachary W. Coder
Hi! Here are the things that have happened around the farm:
WE GOT OUR SHEEEEEP!
Upcoming events:

Weigh-in for lambs is June 7,

And don’t forget Father’s Day!! On June 15
Well that’s just about it. J

The Little Shepherdess
By Megan Joy Coder
Hello!  Many things happening in our neck of the woods.
On May 13th, we went to Finn Hill Cemetery for community service with our 4H club. We raked and picked up pine cones and sticks that were littering the grounds.
On the 18th, we headed over to Goldendale where we bought our lambs. There were many windmills along the way. It was a beautiful drive.  I picked a ewe lamb and named her Lewe-Lewe.
I can’t believe that the fair is only about two and a half months away! I will be busy getting my lamb ready for the show ring.

Maddy Had A Little Lamb
By Madeline Hope Coder
Wow, so much has happened since I last talked to you! My mom had her birthday. My brother, Benjamin, has graduated from school at Washington State University, and is right now in Europe with Joshua! Sarah’s birthday has come and gone. But, the best part is that I now have a ewe lamb whose name is Surely (named after a lamb that I loved last year.)   I will be spending time training her for the fair. Right now, she is still quite afraid of me, but the other night she let me hold her head and lead her a bit.

Joshua has recently been to Oxford and Warwick, and he is very much enjoying his travels.
To further follow his  travels, follow his blog at: http://caseoftheredheadjt.blogspot.com/

The time has now come in which we actually own sheep!
On Sunday, May 18th, we went to Goldendale to pick out our lambs.

After the younger kids picked, the rest of us drew numbers to see the order in which we would choose ours.

As for Joshua, I don't think he's been missing us much.


Posted by GraceChristine at 10:23 AM No comments:

On May 13th, we had the opportunity to volunteer at Finn Hill Cemetery with our 4-H club for community service.

Due to the beautiful sunshine, it was rather enjoyable.

Please stay tuned as I will be posting again soon.

(You might ask why I'm going to be the one posting as opposed to Joshua, and I'll tell you.
Right now, he's on his way to Europe.)

The editors of the Coderlambian are a 4-H group who show their lambs at the Clark County Fair and sell them at the Junior Livestock Auction. Raising market show lambs is mainly a summer project, from when you get them in May to when you sell them in August. However, if you have a breeder ewe (like the Coderlambian), raising market-show lambs starts when the lambs are born, around the end of January to the beginning of February.